The power of an indestructible life.  Indestructible!  Unable to be destroyed.  “In this world you will have suffering,” Jesus said, “but do not fear.  I have overcome the world.”  The disciples did not believe Jesus would overcome the world by suffering.  They thought they would ride his coattails and receive prestige in his earthly kingdom.  Their reaction is understandable; few people would want to accept suffering as a road to glory.  Even Eastern thinkers who abide by the first noble truth, “Life entails suffering,” believe the most appropriate responses are either to deny suffering (mind over matter) or transform it into something useful.  Currently, at least 7 people come to my mind and my heart when I think of suffering.  There are seven people I know of who are suffering from chronic physical pain.  There is no denying it or transforming it; the pain just is.  Some say that if God were truly loving, he would take the suffering away.  I experience God as loving because He suffers with those who are suffering; the very meaning of compassion.  Yet He does more than that.  Christ’s very intercession for us—His ability to atone for our sins and the very fallen-ness of this world—is based not on any regulation or genealogy, but on the power, the scripture says, of an indestructible life.  Jesus lived a life that could not be destroyed, and He gives that life to us.  This enables us, even in the midst of suffering, not to be destroyed.  Therefore Paul can say that “we are pressed on every side, but not crushed; perplexed, but not in despair, persecuted, but not abandoned; struck down, but not destroyed!”  In this life, we suffer, but even in our suffering, we emerge undefeated.  The depth of our agony only illustrates the height of our victory.

These comments might seem foreign to those of our present culture.  In a world where people protest any personal inconvenience or discomfort—in a world where a bus driver will ask a pregnant woman with an ill toddler to get off a city bus because the vague smell of vomit was making some passengers “uncomfortable”—we may be losing the art of compassion.  Are we still able to suffer with others as Christ suffers with us?  Can we suffer with Christ?  “Can you not wait with me for just one hour?” Jesus asks.

My dad’s parents, Charles and Thelma Fiser, built a beautiful rock house in a rural area around Little Rock called Sweet Home, Arkansas on Pye Road, named for Mr. Pye who lived across the street.  It was a huge house to me as I was growing up—certainly indestructible.  I can still close my eyes and imagine walking up the rock steps  from the gravel driveway, brushing my arm across the cool flat stone of the pillars on either side, and walking down the rock sidewalk and up the steps and under the archway of the porch to the door and going through the door into every room.  In the 1970’s my mother met a woman at a crafts fair named Peggy Ann McCormack who supplemented her family’s income with her paintings. She breathed using an iron lung and painted by holding a brush in her mouth because she was paralyzed below her neck and her head was the only body part she could move.  Watching her paint, my mom asked if she had ever painted a house and showed her a picture of my grandparents’ house.  She said she had always wanted to paint a rock house.  So my mom gave her the picture and she painted it.  We gave the painting to my Memaw—as I always called her—for Christmas, and it hung next to the piano in the living room for as many years as I can remember.

My father is the oldest of three brothers.  Once when my grandparents were adding on to the house, the middle brother, Sam, dropped a silver dollar into the wall where a window had been cut out.  It bothered him to no end that he couldn’t retrieve it, but the construction continued and the windowsill was placed and the silver dollar was locked inside of the walls of the house.

My Memaw died of cancer in 1994 and not long after, a tornado came through and destroyed that indestructible rock house.  My grandfather was safe in one of the only rooms that were not destroyed.  Timber and rubble filled the rest of the rooms.  My dad’s youngest brother, Charlie, had to climb through a window to get into the house to see if anything was salvageable.  The only thing left was that painting still on the wall—without a scratch; it had never even fallen from its nail, and was protected by a large section of the roof that had fallen so as the painting did not even get wet.  And on the ground something glimmering caught my Uncle Sam’s eye.  He reached down and picked up that silver dollar. Outside in the yard grew irises unscathed by the wind.  The family dug them up and took them with them to plant in their own yards.

An indestructible life is a life of trust.  In the midst of calamity and pain, do we trust God is there?  Do we believe Christ will give us victory in our situation, as a current song says, “even if the healing doesn’t come”?  Do we believe we will not be defeated by this world?  Do we believe we will overcome?—that suffering will not get the best of us?  In the moment we might be tempted to give up and assume all is lost and irretrievable.  I wonder if, as my uncle picked up that silver dollar, it occurred to him that the God who watched it fall between the walls knew even then how it would be found.  Do we recognize that our history is His Story?  It is as if God was saying:  “I have been there with you.  I am still with you.  I will always be with you. When you find that silver dollar, you will remember that this is true.”  The destruction of tornadoes is an element of our fallen world, but God will use every opportunity to make us indestructible.

I think if I were paralyzed I would be tempted to lie around and watch TV all day long.  One of the most courageous comments I have heard this week is, “I’m going to be in pain whether I lie in bed or whether I get up and do something, so I might as well get up and do something.”  Courageous people inspire us because we hope we would be as courageous if we were in their situation.  Joni Eareckson Tada, the late Christopher Reeve, and Michael J. Fox come to mind as does the woman who painted the picture of my grandparents’ house.

We always have a choice.  When we choose to avoid suffering at all costs, suffering has defeated us.  For instance, what if financial calamity comes upon us and we could make financial gain if we cheated—and we know we could get away with it—but we don’t.  We choose to be honest, and that choice involves financial suffering we would have avoided if we had cheated.

God declared in Psalm 110 about the Messiah, “You are a priest forever, in the order of Melchizedek.”  Melchizedek was a king and a high priest of the Most High God whom Abraham encountered.  He was a high priest before the priests of Israel, descended from Levi, even existed.  His name, Melchizedek, means “King of Righteousness.”  A person who lives an indestructible life is the one who makes the righteous choice even if that choice leads to suffering.

If you fear you may be unable to make such a choice if the situation arises, then pray.  Ask and it will be given to you:  courage and power and strength.  This is Jesus’ role as High Priest on our behalf.  He intercedes for us—making us complete, perfect, in all we need to live an indestructible life—drawing us forward toward a better hope by which we draw near to God and receive His blessings.  God honors our sincere prayers for His strength in the midst of our weakness.  He keeps His promises.  The tornado came, but the painting hanging on the wall was not destroyed—a reminder that neither was the painter destroyed.  Standing in the middle of rubble we can look and see the source of the power of our indestructible life. 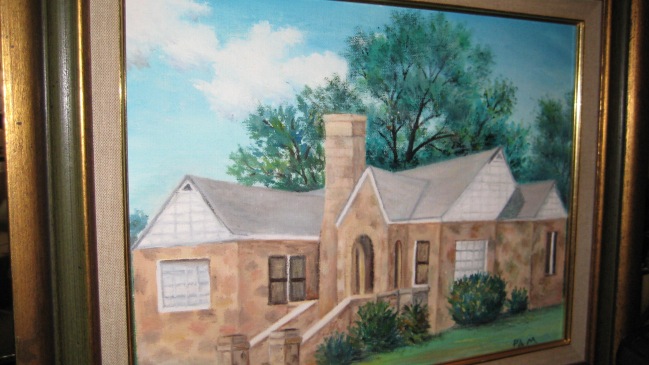 Melchizedek was also the King of Salem, the city which would become Jerusalem, and Salem means peace.  Where does peace come from?  It does not come from the elimination of suffering.  In fact, God’s goal in this world is not the elimination of suffering.  WE are His goal.  He lived an indestructible life so that we, through Him, could be indestructible as well.  Each of us is like God’s beautiful patchwork quilt.  God uses every piece of our lives; He does not throw away a single scrap.  He uses everything to create us, redeem us, and sustain us.  He doesn’t just create us by knitting together our joys; he knits together our sorrows as well and everything else we experience.  Whatever evil there is in this fallen world has no chance of success because God will always take whatever is sorrowful; whatever is agonizing, whatever is heartbreaking, and make something beautiful of it.  Therefore, even in the midst of a storm we can be at peace because we know we will not be destroyed.

There is a reason it is said that the gates of heaven are made of pearls.  A clam suffers when it gets a grain of sand stuck in its mantle.  The grain of sand irritates the clam, causing pain.  The clam overcomes the grain of sand be secreting a liquid substance on it.  The substance hardens and becomes a beautiful pearl.  Without the suffering, there would be no pearl.  Without the suffering of Christ, there would be no gate for us to enter into God’s presence.  So next time you find yourself suffering; next time you witness the suffering of another, do not shy away from it, and do not seek to escape the one who is suffering.  Remain even for an hour, and be at peace, because you know you and the other who suffers will not be destroyed.  You will be like irises unscathed by the wind.  When trouble comes, instead of hanging your head, look around in anticipation and wonder, “What is God going to do with this one?”  If needed, he will scoop you up and you will be replanted where you can grow and thrive.

We have been given the power of an indestructible life—the power of Christ in us.  We trust that nothing in this world can destroy us.  God works all things together for our good.  “In this world you will have suffering,” Jesus said, “but do not fear, for I have overcome the world.”  We go forward in life with courage and peace because “we are pressed on every side, but not crushed; perplexed, but not in despair, persecuted, but not abandoned; struck down, but not destroyed!”  For this we forever give the Most High God all of our praise.